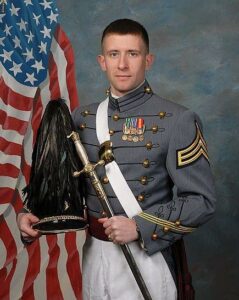 U.S. Army First Lt. John M. Runkle, 27, was killed in Afghanistan on May 26, 2011. His mother and step father will remember him with the Wreaths Across America program Dec. 14.

Darin Lewis doesn’t want his stepson to “die twice.” First Lt. John Runkle, 27, of West Salem, was killed on May 26, 2011, when his unit was struck by an explosive device in Kandahar, Afghanistan. Lewis, an automotive technology teacher at the Medina County Career Center, joined the Wreaths Across America organization along with his wife soon after Runkle died.

“First, you die physically and then you die when someone forgets your name,” he said. “You die twice. We don’t want him to be forgotten.” Wreaths Across America Day is designed to help remember and honor those who lost their lives in action. Lewis said his automotive students sold 300 wreaths in 2017 and 400 last year.  “Our goal this year is 500,” he said. Lewis said the wreaths serve two purposes. First, it’s a fundraiser for the automotive department, and second, it teaches the students about patriotism.  “I told the kids, I can give you candy and you can sell a crapload,” Lewis said. “Or, we can do something better. These (wreaths) should sell themselves. It’s a no-brainer. Just about everyone knows someone (buried) over there in the national cemetery.”

The auto department gets $5 for every $15 wreath sold. They can be purchased here. He said the cutoff to purchase wreaths is Nov. 22.

Lewis said there are 20 juniors and 12 seniors in his program at the career center, and many of them will help lay wreaths Dec. 14 at the Ohio Western Reserve National Cemetery, 10175 Rawiga Road, Rittman, where a local ceremony will take place at noon. Friends, family and relatives will lay wreaths at 1,200 locations around the nation that day.

Parking is available at Rawiga Country Club, 10353 Rawiga Road, Seville, with a shuttle provided to the ceremony. Lewis will be there to remember his stepson. Runkle served with the 4th Battalion, 101st Aviation Regiment, based at Fort Campbell, Kentucky. His body arrived at Dover Air Force Base on May 28, 2011. He is survived by his father, John Runkle, of Wooster, mother, Christine Runkle, of West Salem, and stepfather. Runkle earned the Army Commendation Medal, Army Achievement Medal, National Defense Service Medal, Air Assault Badge, Parachutist Badge, Pathfinder Badge and Ranger Tab.

He had been in the Army prior to attending West Point. He had been deployed to Iraq for 10 months before starting the class of 2009. He graduated in the top 10 percent of his class. Five other servicemen were killed with him in Afghanistan that day.